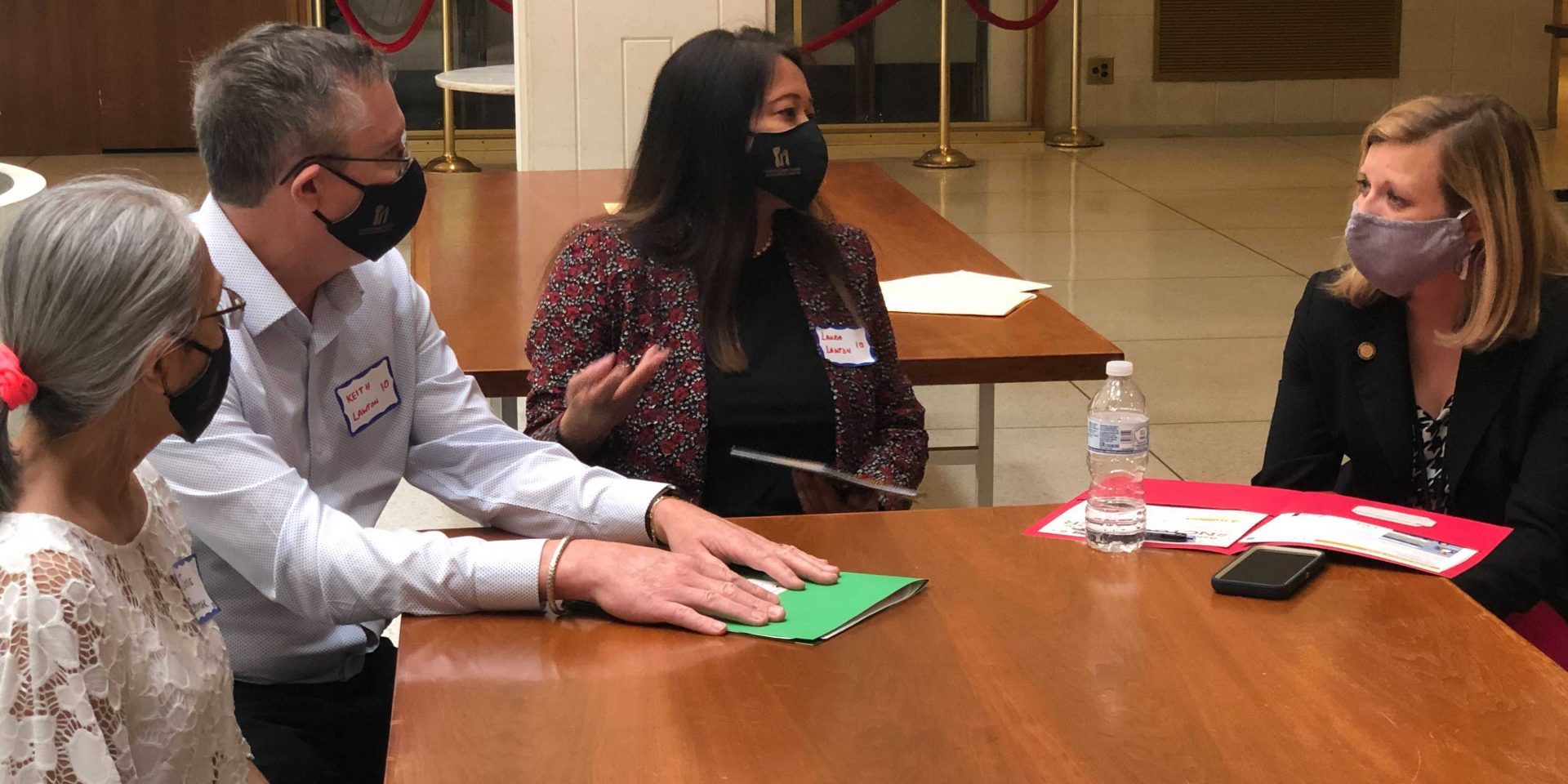 It was an honor for us to attend North Carolina’s first Asian Lobbying Day on May 5, 2021. We were invited by North Carolina Asian Americans Together (NCAAT) to lobby for the Hate Crimes Prevention Act (SB439). It had previously been filed the last three years without success. As first-time lobbyists, we didn’t know what to expect and the NCAAT team provided many opportunities to educate us on the bill, the process of law-making, and the lobbying process. The NCAAT team paved the way for our meetings by making appointments on our behalf with Sen. Sarah Crawford and Rep. Amos Quick.

Once inside the building, we gathered as a group in one of the meeting rooms where we were addressed by four people deeply involved with SB 439. Jay Chaudhuri (co-author of the bill, and Senate Democratic Whip), Mujtaba Mohammed (co-author of the bill and Democratic Senator for District 38), Chavi Khanna Koneru (Executive Director of NCAAT), and Ed Binanay (President of Asian Pacific Islander Outreach). Each gave us an excellent perspective on the opportunity and the challenges facing the bill. The major point from the speakers was that legislators, regardless of district or party, received great value in hearing from their constituents. The personal stories of constituents are extremely important in persuading lawmakers’ decisions.

We first met with Crawford. We were a little taken aback as our group of six met in an open space in the building and not in her office. In addition, we were being filmed by a television news crew. It felt strangely informal, but by the time we were done, it matched the intimacy that the meeting had brought. We opened our time making sure we understood her stance on SB439 so that we could approach the conversation in a constructive way. We shared stories from our own experiences and from our family that support equality and fairness for everyone in our state. Crawford, in turn, shared her support for the bill. She said that bi-partisan support would be needed to pass the legislation. It became apparent that speaking only to allies in the discussion was not going to be enough. We had to talk to those opposed, as well as those in the “undecided” camp.

Our second meeting was with Quick. Again, this meeting took place in the corridor. We were used to it now. He readily accepted our position and spoke to us about the need for continued action and patience. His gift to us was that good legislation can sometimes take years to get right, yet it can only become good law with persistence and patience. We can’t give up the conversation or stop talking about the need for it. We also can’t expect the process to be completed with one visit to our senators or representatives.

In our eyes, our first foray into lobbying was successful and encouraging. We wholeheartedly believe that our success was due, in part, to NCAAT and how they helped prepare us for the meetings. We look forward to working to get this bill passed because of its importance, no matter how long it may take. Participating in face-to-face or virtual meetings with your lawmakers is imperative with this bill as well as others that you may feel passionate about supporting.

Registering and getting out to vote can mean major progress for AAPI communities
June 16, 2020