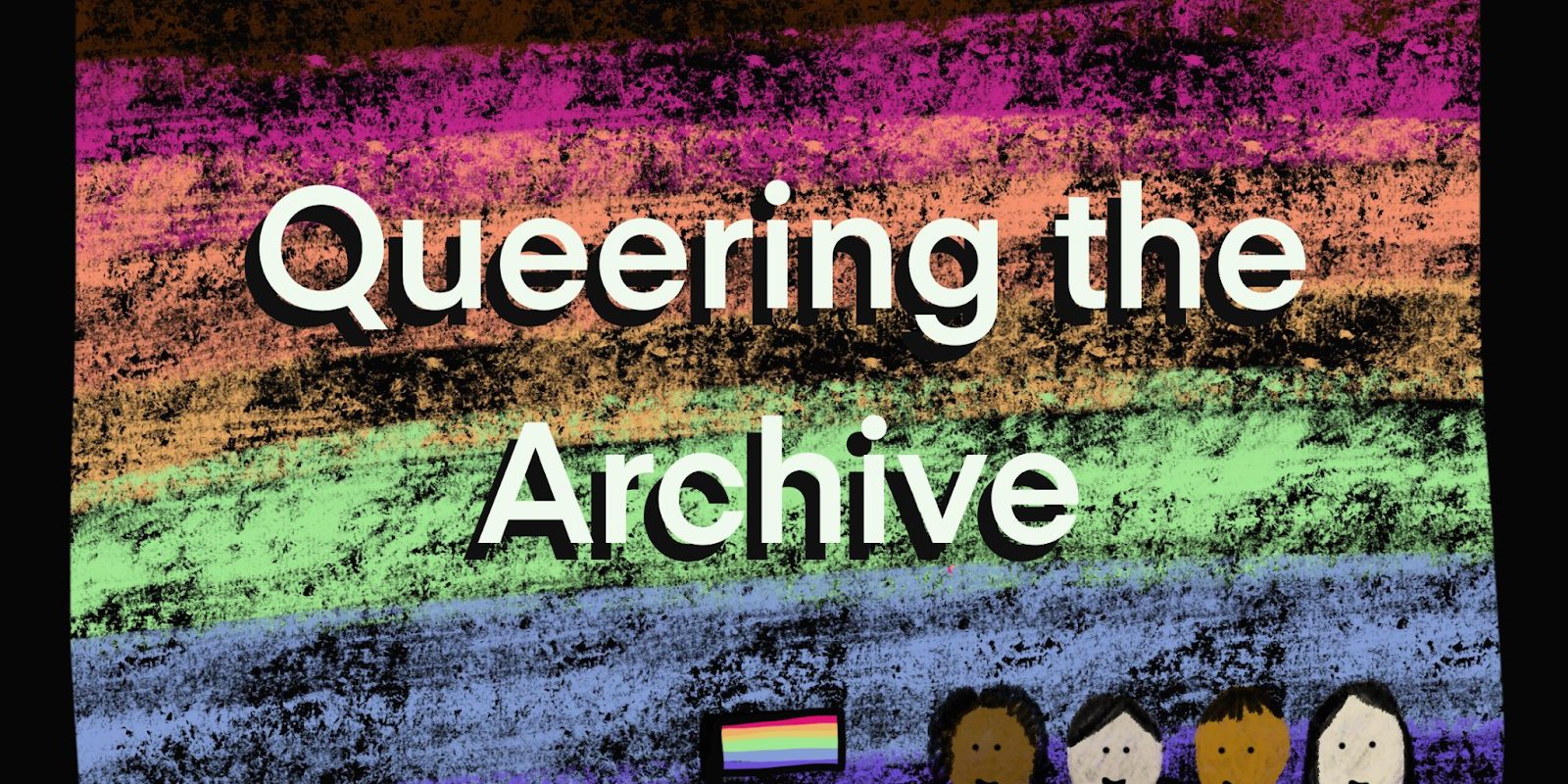 The first time I saw Kitty Tsui—and really, anybody like her—was the fall of my sophomore year. Her photograph was printed in black and white in an essay anthology, which I had checked out discreetly from my university library using the self checkout station. Hiding under the hanging sheets of my lofted bed, I marveled at how she took up space on the page—shirtless, proud, Asian, and butch.

Tsui is known as many things, a lesbian activist, a body builder, an author, an editor, a performer. To me, Tsui was one of the first Asian American queer people I grew to learn about, and it was only because I had gone excavating. It’s important to understand that this lack of knowledge is widespread, and that it’s not due to a lack of queer Asian Americans existing in the world, historically and presently. Rather, it’s the result of erasure.

First, it’s unsurprising that queer Asian Americans aren’t widely understood in a country that fails to see Asian Americans at all. In a survey conducted by Leading Asian Americans to Unite for Change (LAAUNCH), when Americans were asked to name prominent Asian Americans, the most common answer was “Don’t know” (42%), followed by Jackie Chan (11%), who is a citizen of China, and then Bruce Lee (9%).

This also extends past popular understanding into our keeping of history—archival analysis of queer Asian histories reveals gaps because of the small amount of information preserved. Tina Takemoto describes the struggle of piecing together the story of Jiro Onuma, a gay Japanese man interned at concentration camp Topaz during World War II. Takemoto has a collection of photos from Onuma’s photo album, but very little else. Acknowledging “the various ways that recovering queer histories is itself fraught with discontinuity, omissions, and deferrals,” they participate in a practice called “queer speculation,” wondering what Onuma’s story could have been based on the photo backgrounds, the people he’s with, and what the omissions can tell us.

While Asian American queerness isn’t common knowledge or preserved, it has also historically been rejected by Asian communities as un-Asian. In “Poem in Noisy Mouthfuls,” Chen Chen writes his mother’s reaction when she found out he was gay: “This would never have happened if we hadn’t come to this country.” Chen Chen’s experience is unfortunately echoed elsewhere. In the first issue of Anamika (1987), a newsletter made by queer South Asian women (self described as khush, which means happy or gay in Hindi and Urdu), the editor writes, “We refuse to continue to be invalidated as a ‘Western’ phenomenon.” In Encyclopedia of Homosexuality (1990), Siong-huat Chua writes “While Asian traditionalists may tolerate instances of homosexuality if discreet and surreptitious, an open avowal of gayness is often condemned as a Western corruption.” I remember my mother sitting me down in a Chinese restaurant when I was in middle school, urging me not to confuse protectiveness over my friends for attraction. I hadn’t come out to her, but I suspect she’d read my journals and made a valiant effort to nip my developing homosexuality in the bud. I wonder if it confused her, my desire to appear masculine, my feeling out of place in school when I’d always thrived in that environment as a younger child…if she had ever met an openly gay Asian before? What was her frame of reference as an immigrant who came to the states in the early 80s?

At the same time that Asian queerness has been rejected as a Western phenomenon, white America finds Asian queerness unfathomable. I was once told by a (white) gay friend that I passed as straight, but in reality, it seemed to them that I simply had no sexuality. I wasn’t straigt or queer, because I was Asian first. In the introduction to Q&A, David Eng and Alice Hom recount how their friend, a butch Asian woman, was mistaken by a pair of white women in a bathroom as a Chinese man who didn’t understand English: “Ironically, while it is easy for the white woman to see an emasculated Asian American man in this space of urinary segregation, it is difficult for her to envision a butch Asian American lesbian there.” A butch Asian American in a bathroom? Maybe more likely than you think. This instance illuminates how stereotypes that other and depict Asian men as less masculine then in turn affect invisibilities of another group of Asian Americans.

But why is it urgent to include queerness in conversation with other Asian American issues? Simply, queer Asian Americans exist and have existed for a long time. I’ve tried to show that here by quoting the work of just a few queer Asian Americans of the past and present. To exclude that narrative would be to create an untruthful history and a disservice to the diversity of Asians in America, but also a damaging idea that construes Asian queerness as wrong. When we make spaces for Asian Americans, we must welcome their other identities in tandem.

In helping to do that work of remembering, let me provide you with a primer of queer Asian American activism and history in the USA. In “Breathing Fire: Remembering Asian Pacific American Activism in Queer History,” Amy Sueyoshi writes, “While many may perceive Asians in America as ‘closeted’ in this earlier part of APA history, historians who privilege heterosexuality and whiteness more likely rendered them irrelevant and therefore invisible in America’s past.”

The first wave of immigrants to the USA included same sex intimacies between Pacific Islanders (and with white men), as well as people who identified specifically as queer like Kosen Takahashi, illustrator for a Japanese American newspaper. By the 1920s, Margaret Chung became America’s first Chinese surgeon, and known for wearing masculine clothing and rumored as being a lesbian. A Filipino named Rose Bamberger was one of the original group that formed the Daughters of Bilitis in the mid-1950s, the first lesbian civil and political rights group in the USA (though she left the group early on). The Stonewall Inn riots against police harassment are often cited as the beginning of the gay liberation movement, but Tamara Ching was already on it three years earlier in 1966. An activist and sex worker of Native Hawaiian, Chinese, and German descent, Tamara fought back with other street queens in what is called the Compton’s Cafeteria riot, which resulted in the beginning of transgender advocacy in San Francisco. During the 1970s and 80s, Asian queers founded or cofounded groups and gatherings like Unbound Feet, Asian Lesbians of the East Coast, Asian Pacific Lesbians and Gays, and Gay Asian Pacific Support Network, just to name a few. They participated in the response to AIDS, for example with the Asian AIDS Project. The 1990s only saw growth in queer Asian activism due to the rise of the internet. Today, groups like The National Queer Asian Pacific Islander Alliance and Q-WAVE continue the work, and individuals like actor George Takei, Representative Mark Takano, and singer Hayley Kiyoko exist openly in the public eye.

It’s urgent that we talk about Asian queerness, because in doing so we are speaking the truth. Asian American queer people exist—but not only exist: built movements and must be considered when creating inclusive spaces. The results of better understanding our past can be rewarding: perhaps we’ll be more equipped to handle when a friend comes out, or more thoughtful when it comes to designing group meetings and spaces, or more willing to claim our own identity as part of a long history.

Li-Anne is a rising college senior studying English literature and American studies. Her niche interest is in how alternative media (such as newsletters and zines) can serve as historical and potential avenues for organizing. In her free time, she enjoys baking and writing about video games.

Coming out as an Asian American
December 3, 2021